Amit Shah Speaks on internet restoration in J&K. Union Home Minister Amit Shah has said that decisions will be taken on it when the local administration is convinced that it is secure to resume the services.
Read More 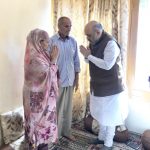