Applications are invited from the male and female candidates belonging toUTs of Jammu & Kashmir and Ladakhfor the post of Constable (GD) in Border Security Force (BSF) and Central Industrial Security Force (CISF) in the level – 3(Rs. 21700 – 69100) in the pay matrix as per 7th Central Pay Commission plus usual and admissible allowances to Central Govt. employees from time to time. In addition Ration allowance, Medical Assistance, uniform allowance,
free accommodation, LTC, etc. as admissible to Central Govt. employees. The post has all India liability and selected candidates can be posted anywhere in India and even abroad. They will be governed under relevant Acts and Rules of respective Forces as well as CCS Rules. The selected candidates will be governed by the new contributory Pension Scheme, which came into effect from 01 Jan’ 2004.

The Recruitment of Constable (GD) in respect of domiciles belonging to the UTs of Jammu & Kashmir and Ladakh will be made as under:- 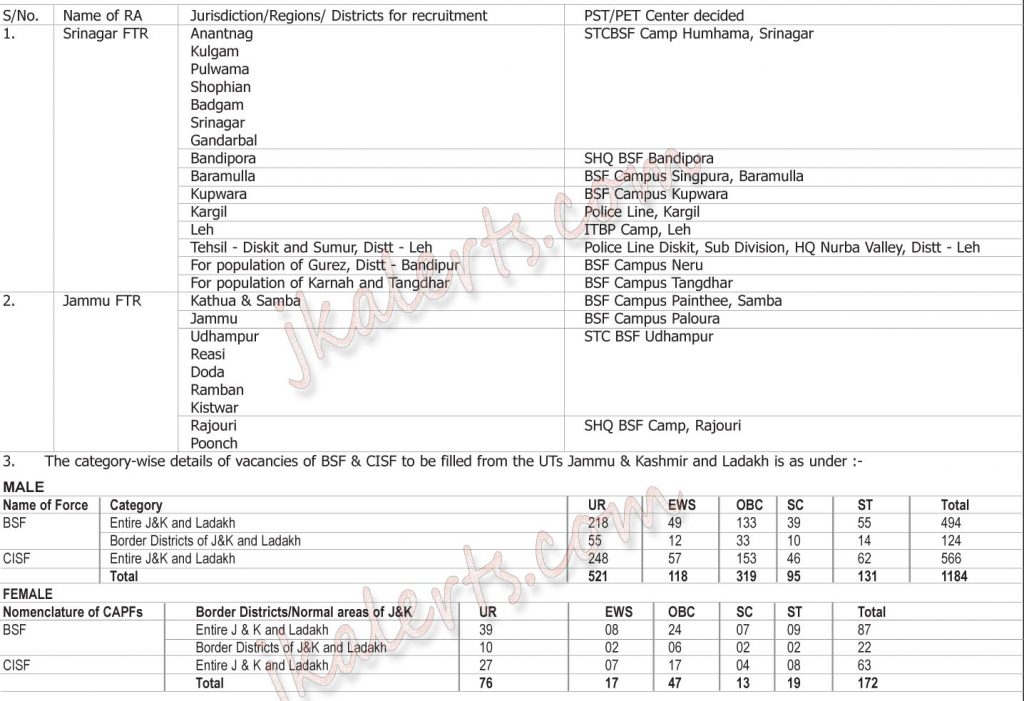 HOW TO APPLY AND BY WHICH DATE

A) Candidates who fulfill the above physical and medical standards should personally appear at the PST & PET center designated in respect of their
Districts from 7th Nov’ 2019 to 14th Nov’ 2019 for registration of their applications. The candidates while reporting at the PST & PET centers
will bring along with them a duly filled Application form as per the prescribed format at Annexure -I. The application form should be typed or neatly hand written on one side only in full scape plain paper with passport size photograph affixed at prescribed place in the application form. The
application forms should be enclosed with the following documents :-

a) Candidates are requested to fill up the application form in Hindi or English language.
b) Self attested copies of certificate/testimonial as proof of Educational qualification and age/date of birth.
c) Self attested copy of caste/category certificate for SC/ST/OBC/EWS candidates issued by the prescribed authority.
d) Self attested copy of Domicile certificate and any one of the identity proof i.e. Aadhar Card, Voter ID card or Ration card etc.
e) A form for issue of Admit card will also be filled in and submitted along with Passport size photograph as per Annexure-II along with the application form.

B) Incomplete application will be summarily rejected and no correspondence on this will be entertained.
C) Admit card with roll number and general instructions for appearing to the selection process will be issued personally to the eligible candidates on submission and registration of their application forms at the PST/PET centers. They will be called to appear for the selection test at the PST/PET center on the subsequent day/days. No TA/DA is admissible.