J&K Reorganisation Bill 2019. What will change in Jammu & Kashmir?

• The Bill seeks to scrap Article 370 and to make Jammu and Kashmir a Union Territory with the legislature and Ladakh Union Territory without legislature.
• The Jammu and Kashmir Reservation (Second Amendment) Bill 2019 having provisions of 10 per cent reservation for Economically Weaker Sections of upper caste in the state was also passed by the upper house.
• Home Minister Amit Shah said that Jammu and Kashmir will become a true part of India in letter and spirit once article 370 is removed.
• Amit Shah, speaking in the Rajya Sabha, said that the provisions of Article 370 are discriminatory on the basis of gender, class, caste and place of origin

Bifurcation of Jammu and Kashmir

What is the difference between UT with and without legislature?

A Union Territory with a legislature, like Delhi and Puducherry, has its own assembly and elected MLAs. But it does not have a Vidhan Parishad or Upper House. The final decision rests with Lieutenant Governor, appointed by the Centre. A UT, like Chandigarh, without legislator is not represented by elected representatives.

Difference between Ladakh and Jammu and Kashmir

Ladakh will become a UT directly under the Centre command and Jammu and Kashmir will have partial statehood. Home Minister Amit Shah has said that the government is ready to reinstate full statehood to the regions when the time is right. 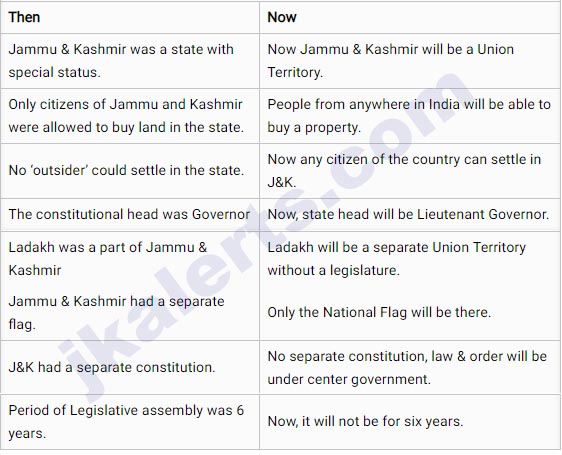 India would now have 28 states and nine union territories in the country.

There were seven union territories (UTs) specified under Part II of the First Schedule to the Constitution of India, viz. Andaman and Nicobar Islands, Chandigarh, Dadra and Nagar Haveli, Daman and Diu, Lakshadweep, National Capital Territory of Delhi and Puducherry.

States are explained as the administrative unit that has its elected government, which has the right to frame its laws. It has its own Legislative Assembly and the Chief Minister, for administration. The Governor acts as the representative of the President, in states.

There is a distribution of sovereign legislative and executive powers between the Centre and state, regarding the territory of that state.

What is union territory?