The Centre on Tuesday instructed private vaccination centers to not charge more than Rs. 780 for Covishield, Rs. 1,410 for Covaxin and Rs. 1,145 for Sputnik V jabs. The Centre said that private hospitals can charge up to Rs. 150 on service charges and the state governments will monitor the prices being charged.

The Centre also said that steps are being taken to put the required validations by the CoWIN portal to make sure that prices declared by several private Covid-19 vaccination centres do not exceed that mandated by the government.

The government asked the state governments to take strict action against private CVCs wherever instances of over-charging arise.

Covishield, manufactured by Pune-based Serum Institute of India, cost Rs. 600 per dose as declared by the company. The GST on Covishield is Rs. 30 and with a service charge of Rs. 150, a beneficiary will not pay more than Rs. 780 for a jab of the Oxford-Astra Zeneca-developed vaccine.

Sputnik, which is manufactured by several manufacturers like Gland Pharma, Hetero Biopharma, Panacea Biotec, Stelis Biopharma and Virchow Biotech in partnership with the Russian Direct Investment Fund (RDIF), has set the price at Rs. 948. With a GST of Rs. 47.40 Rs47 and a service charge of Rs. 150, a beneficiary will be charged Rs. 1,145.

Covaxin, manufactured by Bharat Biotech, costs Rs. 1,200 per dose as declared by the Hyderabad-based pharma giant. The GST on Covaxin is Rs. 70 and with Rs. 150 service charge levied by private centers it will cost the beneficiary Rs. 1,410 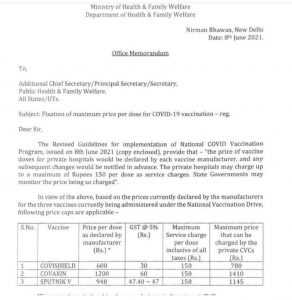