Pilgrims will get their token number from Saraswati Pham. Near Railway Station. Jammu. The place and date for registration will be mentioned in the token. Aadhar card of the pilgrims is mandatory for registration.

After collecting the token, pilgrims can register themselves by paying the charge of Rs. 220 at the following places:

5) Geeta Bhawan, Parade (Only for Sadhus/Saints)

Pilgrims shall be provided RFID Tag at registration centre itself which is mandatory with the pilgrims permit. The pilgrims is allowed to move in & out of from Yatri Niwas from 10 am to (5 pm.

Pilgrims going by their private vehicle shall report at Yatri Bhawan Bhagwati Nagar after getting fuel filled before 10 pm, so they can be part of the convoy.

For the journey, the travel ticket of JKRTC vehicle will be available at the Yatri Niwas only.

Free Wi-Fi facility is available in the city for the pilgrims. 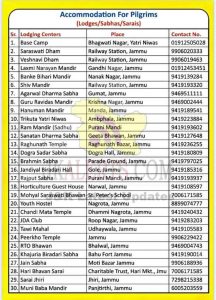