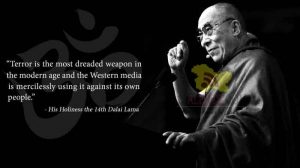 The Dalai Lama is set to visit the union territories of Jammu and Kashmir and Ladakh during July 14-15, the Tibetan spiritual leader’s first trip outside his base in Dharamshala since the beginning of the Covid-19 pandemic more than two years ago.

The visit is unlikely to go down well with Beijing, which on Thursday criticized Prime Minister Narendra Modi for greeting the Dalai Lama on his 87th birthday and said New Delhi should stop using Tibet-related issues to interfere in China’s “internal affairs”.

People familiar with developments said the Dalai Lama, who has been largely closeted in Dharamshala for the past two years because of the pandemic, is expected to be in Jammu on July 14 and in Ladakh the following day.

The visit comes against the backdrop of the dragging military standoff between India and China in the Ladakh sector of the Line of Actual Control (LAC), with both sides arraying more than 50,000 troops each in the region. China usually bristles at any visits by the Tibetan leader to regions such as Ladakh and Arunachal Pradesh, where it claims territory on the Indian side of the LAC.

The Dalai Lama is expected to visit the famous Thiksay monastery in Leh and a border region where Chinese troops had put up banners on their side of the LAC in July last year, asking people not to celebrate the spiritual leader’s birthday, the people said.

External affairs ministry spokesperson Arindam Bagchi on Thursday dismissed China’s criticism of the Indian prime minister greeting the Dalai Lama on his birthday on Wednesday, and said the Tibetan leader was an “honored guest”.

He told a weekly news briefing: “It is a consistent policy of the government of India to treat His Holiness Dalai Lama as an honoured guest in India and as a respected religious leader who enjoys a large following in India.”

The Dalai Lama is “accorded all due courtesies and freedom to conduct his religious and spiritual activities in India”, and the Tibetan leader’s birthday is celebrated by many of his followers in India and abroad, he added.

“The birthday greetings by the prime minister to his Holiness on his 87th birthday should be seen in this overall context,” Bagchi said.

Hours earlier, Chinese foreign ministry spokesperson Zhao Lijian contended that India should “recognise the anti-China separatist nature” of the Dalai Lama, and abide by its “commitment to China, speak and act prudently and stop using Tibet-related issues to interfere in China’s internal affairs”.

The Chinese government routinely criticises any official interaction – even phone calls – between the Dalai Lama and Indian leaders, terming them an infringement on Beijing’s internal affairs. This was the second year in a row that Modi greeted the Dalai Lama on his birthday since he became prime minister in 2014.

Zhao also lashed out at US secretary of state Antony Blinken for greeting the Dalai Lama, saying China is firmly against any engagement by any country with the Dalai Lama. He added the Dalai Lama is a “political exile disguised as a religious figure”.

“We urge the US side to have full understanding of the important and sensitive nature of Tibet-related issues, respect China’s core interests, have a clear understanding of the anti-China separatist nature of the Dalai group and abide by its commitment on Tibet-related issues, stop engaging with Dalai Lama in any form and stop sending any wrong signal to the outside world,” he said.

Beijing has consistently dismissed Western allegations of human rights violations in the Tibetan Autonomous Region, arguing that the poor region has instead flourished under the Communist Party of China. Zhao repeated this argument on Thursday.