The committee created by the Jammu and Kashmir Service Selection Board to investigate “alleged anomalies in the written test” for sub inspector positions in J&K police has been directed to submit its report by June 24.

According to a Government order, the committee is led by Financial Commissioner (Additional Chief Secretary), Home Department, R K Goyal, and its members include Principal Secretary General Administration Department and Secretary Department of Law, Justice, and Parliamentary Affairs. The committee, which has been given the opportunity to co-opt if needed, has been asked to produce a report/recommendations within 15 days of the directive’s issuance, which is June 10, according to the order.

Lieutenant Governor Manoj Sinha said at a function in Udhampur on June 9, adding, “no fingers were pointed at any other recruitments done so far and if there are apprehensions in mind of people, it is duty of the administration to carry out an impartial probe and take necessary action,” he had said. 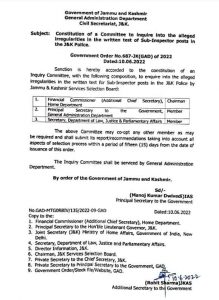