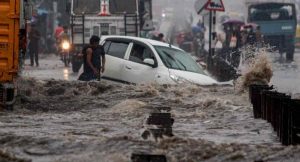 The India Meteorological Department (IMD) on Saturday said that the monsoon has covered the entire country, as it finally entered states like Gujarat and Rajasthan. The national capital also saw incessant rains in the past couple of days, after several days of cloudy weather. IMD has also said that the monsoon can pick up pace in the coming months, and has predicted well-distributed rainfall in July.
“Southwest monsoon has covered the entire country on Saturday, six days before the normal date of July 8,” the weather office said. The southwest monsoon had its onset over Kerala on May 29, three days ahead of the normal date of June 1.
However, the progress of the southwest monsoon, crucial to the farm-based economy, has been sluggish with the country reporting a rainfall deficit of eight percent.
Weather scientists expect the monsoon to pick up pace in the coming months and have predicted well-distributed rainfall in July.