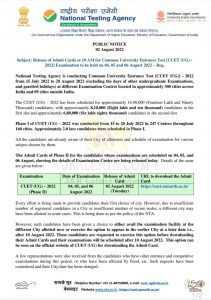 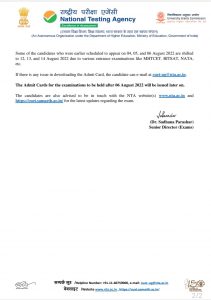 National Testing Agency is conducting Common University Entrance Test [CUET (UG)] – 2022 from 15 July 2022 to 20 August 2022 (excluding the days of other undergraduate Examinations, and gazetted holidays) at different Examination Centres located in approximately 300 cities across India and 09 cities outside India.

All the candidates are already aware of their City of allotment and schedule of examination for various subject chosen by them.

The Admit Cards of Phase II for the candidates whose examinations are scheduled on 04, 05, and 06 August, showing the details of Examination Centre are being released today. Details of the same are given below:

However, such candidates have been given a choice to either avail the examination facility at the different City allotted now or exercise the option to appear in the earlier City at a later date i.e., after 10 August 2022. These candidates are requested to exercise this option before downloading their Admit Cards and their examinations will be scheduled after 10 August 2022. This option can be seen on the official website of CUET (UG) for downloading the Admit Card.

A few representations were also received from the candidates who have other entrance and competitive examinations during this period, or who have been affected by flood, etc. Such requests have been considered and their City/date has been changed.