Sanction is hereby accorded to the engagement of following doctors who has applied for the post of House Officers/House Surgeons are directed to report concerned HOD as shown against each for a period of (O6) Months on the terms and conditions.

The concerned doctors are as such directed to report Concerned HOD for further dutles within a period of (03) days from the date of issuance of this order failing which the order shall be deemed to have been cancelled ab-initio. 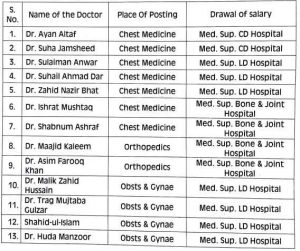 The concerned DDO’s shall ensure that he shall not disburse the monthly stipend in favour of the doctors after expiry of the term, til extension is granted in their favour by the competent authority.

The doctors thus engaged as House Officers/House Surgeons shal route their joining report through concerned Head of the Department to the Office of the Registrar Academics.