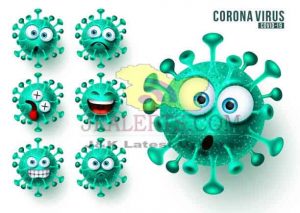 A new sub-lineage BA.2.75 of the Omicron variant of the coronavirus has been detected in countries like India and the World Health Organisation is following this, Director-General Tedros Adhanom Ghebreyesus said.
“On COVID-19, globally reported cases have increased nearly 30 percent over the past two weeks. Four out of six of the WHO sub-regions saw cases increase in the last week,” Ghebreyesus said at a press briefing Wednesday.
“In Europe and America, BA.4 and BA.5 are driving waves. In countries like India a new sub-lineage of BA.2.75 has also been detected, which we’re following,” he said.
On the emergence of the potential Omicron sub-variant BA.2.75, WHO Chief Scientist Soumya Swaminathan said in a video posted on Twitter that there has been an emergence of a sub-variant that is being called the BA.2.75 “first reported from India and then from about 10 other countries”.
She said there are still limited sequences available of the sub-variant to analyze, “but this sub-variant seems to have a few mutations on the receptor-binding domain of the spike protein. So obviously, that’s a key part of the virus that attaches itself to the human receptor. So we have to watch that. It’s still too early to know if this sub-variant has properties of additional immune evasion or indeed of being more clinically severe. We don’t know that.”
“So we have to wait and see,” she said, adding that WHO is tracking it and the WHO Technical Advisory Group on SARS-CoV-2 Virus Evolution (TAG-VE) is constantly looking at the data from around the world.
“And at any time if there is an emergence of a virus that looks very different from a previous one, enough to be called a separate variant of concern, then the committee will do that.”
The WHO weekly epidemiological update on COVID-19, released July 6, said that globally, the number of new weekly cases increased for the fourth consecutive week after a declining trend since the last peak in March 2022.
During the week of June 27 to July 3, over 4.6 million cases were reported, a figure similar to that of the previous week. The number of new weekly deaths declined by 12% as compared to the previous week, with over 8100 fatalities reported.
As of July 3, 2022, over 546 million confirmed COVID19 cases and over 6.3 million deaths had been reported globally.
The COVID update said that among Omicron lineages, the proportions of BA.5 and BA.4 continue to increase. BA.5 has been detected in 83 countries. Although BA.4, which has been detected in 73 countries, is also rising globally, the rate of increase is not as high as that of BA.5.
The South-East Asia Region has been reporting an increasing trend in cases since early June, with over 157,000 new cases reported, a 20% increase as compared to the previous week. Five of 10 countries (50 percent) for which data are available showed increases in the number of new cases of 20% or greater, with the greatest proportional increases observed in Bhutan, Nepal and Bangladesh.
The highest numbers of new cases were reported from India (112,456 new cases, an increase of 21 per cent), Thailand (15,950, an increase of 6 per cent) and Bangladesh (13,516 new cases, a 53 per cent increase).
The number of new weekly deaths in the region increased by 16 per cent as compared to the previous week, with over 350 new deaths reported. The highest numbers of new deaths were reported from India (200 new deaths, a 39 per cent increase), Thailand (108 new deaths, a decline of 14 per cent), and Indonesia (32 new deaths, an increase of 7 per cent).
WHO Incident Manager COVID-19 Abdi Mahamud said that now is not the time to declare that the pandemic is over.
“We’re still in the midst of the pandemic and the virus has a lot of force left. So whether it is the BA.4 or BA.5 or BA.2.75, the virus will continue. It does what it does good,” he said adding that people and communities must continue to wear masks, avoid crowds and ensure that the most vulnerable and high-risk population is protected.
Ghebreyesus said compounding the COVID-19 challenge are a number of factors, including that testing has reduced dramatically in many countries. “This obscures the true picture of an evolving virus and the real burden of COVID-19 disease globally. It also means that treatments are not given early enough to prevent serious illness and/or death.”
He said secondly, new treatments, especially promising new oral antivirals, are still not reaching low- and low-middle income countries, depriving whole populations that need them. Further, as the virus evolves, vaccine protection “while still really effective at preventing serious disease and death” does wane.
“Decreasing immunity underscores the importance of boosters, especially for the most at-risk,” the WHO chief said adding that each wave of the virus leaves more people with the long-COVID or post-COVID condition.”
“This obviously impacts individuals and their families but it also puts an extra burden on health systems, the wider economy and society-at-large. These challenges require action at a global, national and local level,” he said.