Nothing unusual in hoisting tricolour in every household in J&K: Bukhari 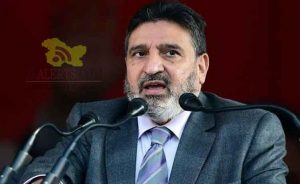 Apni party president Syed Altaf Bukhari on Wednesday said that there is nothing unusual in hoisting the Tricolour in every household in Jammu and Kashmir and that people here have been hoisting the Tricolour in the past as well.
Talking to reporters on the sidelines of a function here, Bukhari, as per the news agency said that hoisting the Tricolour in every house as per some scheme is a welcome step.
“There is nothing unusual in it, but maybe those enforcing it are making it unusual. We have been hoisting the flag in the past as well, so there is nothing new in this,” he said.
On being asked about whether the government has any doubt over the nationality of Kashmiris, he said that they don’t have any doubt about that as people of J&K are no less than anyone.
“The way people of Jammu and Kashmir have been sacrificing themselves for the country, I don’t think people of any other states would have done anything like that,” he added.
He also said that there is nothing wrong in meeting the Prime Minister or Home Minister, as is being said. “If meeting the PM or HM to restore and seek the rights of the people is a sin, then we will commit this sin a thousand times. Tomorrow, if we have to get back our statehood, who will implement that? It is PM and the HM who will do that, so we have to work with them for restoring the rights of the people of Jammu and Kashmir,” he said